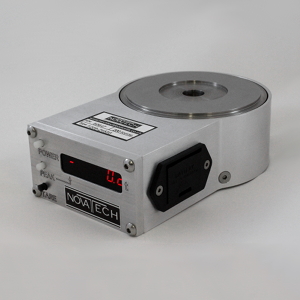 The specific needs of a well known British car manufacturing company prompted the development of the SD039 integral loadmeter.

The car company uses large 800 tonne Danly presses and various die sets in order to form and cut body panel pieces. For quality control purposes and trouble shooting, they are required to monitor the closing force of the press at crucial points within the die.

The customer had previously been using a wired system from another supplier with reasonable success. However, with increasing diversity within the product range, the necessity for constant tool changing meant that a wired system was cumbersome and prone to damage. Large cable runs looped around the sides of the presses from each corner of the die sets and along the floors to a central computer. The loadcells had to be put in place after the die had been positioned and retrieved again before the die was removed. Cables often became trip hazards and could easily be hit by pieces of metal being sheared off by the cutting press. Several expensive sets of sensors had been written off due simply to cable damage and with each replacement the entire computer system had to be reconfigured.

It was decided that a new system of universal, portable sensors was needed so that the dies could be preprepared in advance of positioning into the press. An integral display was preferred over our T24 wireless telemetry system as a real time overview of the force measurement was not required. The loadcells would simply need to be zeroed once in position and the peak force noted once the die had been removed from the press. The F209-Z4538 and Z4649 loadcells were designed to be usable in as many different die sets as possible, with the benefits of being compact, lightweight and easily handled. The SD039 display exists as a single PCB and can be built into many of our larger loadcell types. The front panels are made and engraved to suit the loadcell design. A red filter was chosen to enhance the contrast for the 8mm digits in order for them to be easily read from a short distance despite the low light levels in the facility.