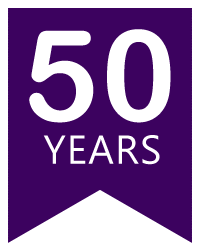 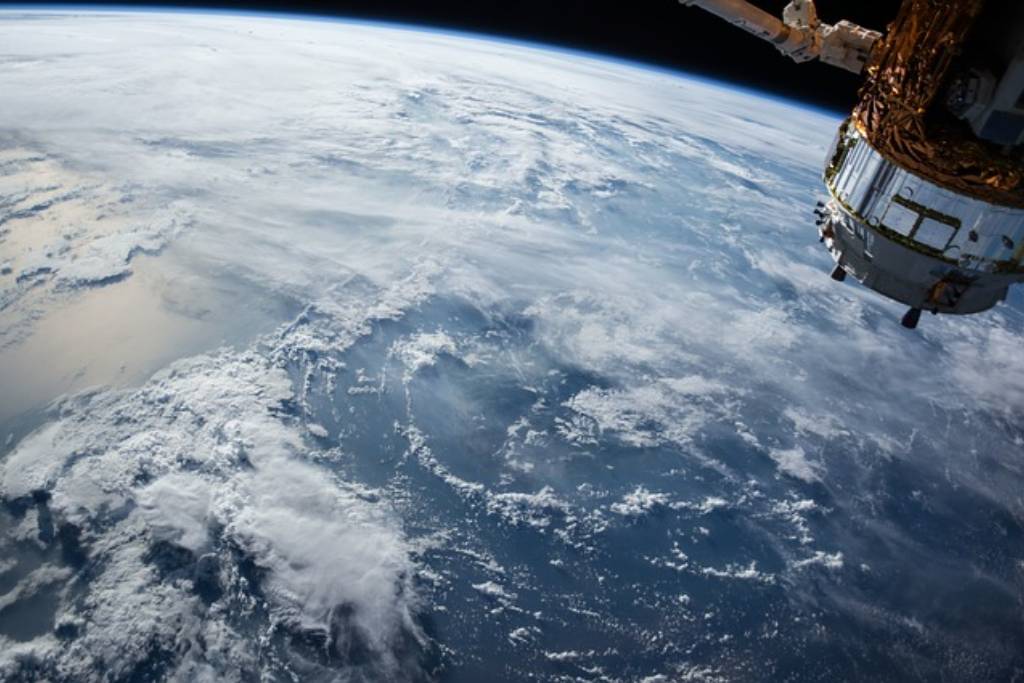 The exploration of space is a particular interest for a number of Engineers at Novatech and it is with great pride that we can consider ourselves to have played some small part in ongoing efforts. Over a number of years we have provided more than 100 bespoke high precision loadcells to the National Aeronautics and Space Administration (NASA). Most of these have been used for the testing of parachutes and other aerodynamic decelerators for manned entry vehicles.

In order to achieve their goal of a manned mission to Mars, NASA have been trialling new technologies to facilitate the safe landing of heavier payloads on the planet's surface. Recent trials conducted by a team from the Ames Research Center have centred around devices referred to as Hypersonic Inflatable Aerodynamic Decelerators (HIADs).

HIAD is the general term NASA have given to any inflatable device that makes use of a large surface area to increase the aerodynamic drag exerted on a craft during atmospheric entry. The construction consists of a number of stacked inflatable ring segments composed of fibre-reinforced thin films. The segments are then bound together with high strength textiles in the form of woven structural straps. These straps help retain the required shape of the HIAD whilst distributing the aerodynamic load as evenly as possible throughout the inflatable structure. Before actual flight tests could be conducted NASA needed to ensure that the straps and the method of connection to the central hub of the space craft could withstand the extreme forces that would be experienced during operation. Initial tests were to be done in a large 40 x 80ft wind tunnel at the National Full- Scale Aerodynamics Complex located at the NASA Ames Research Center. 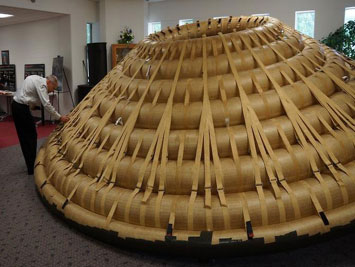 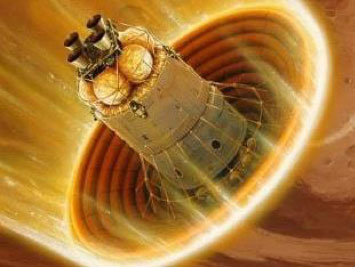 Various load measurement techniques were researched, developed, and implemented before it was decided that bespoke force measurement sensors would be required. The measurement system would need to be comprised of a combination of custom clevis pin and in-line strap tension loadcells. Initially the load pins would be utilised on 1 in every 4 of the 28 total connections between the structural straps and the central body of a 6m HIAD. The strap tension loadcells would be used in larger quantities on the structural straps that connected the inflatable ring segments. These needed to be light weight and low profile so that they would not have any mechanical or dynamic influence on the items under test.

For subsequent low Earth orbit flight tests a set of additional sensors were needed that would be suitable for a combination of harsh environmental conditions. These still needed to be high precision but a greater emphasis was put on overall robustness. The HIAD is designed to travel at speeds greater than Mach 5 (3836mph) and would be fully inflated outside the atmosphere, exposing the sensors to an 'ultra-high' vacuum environment. The loadcells needed to be suitable for use in a vacuum and be able to withstand both the random and shock vibrations associated with launch vehicle take-off. These vibrations are estimated to have an acceleration spectral density (ASD) of up to 0.026g 2 /Hz at 2000Hz and a shock response spectrum (SRS) of up to 846.7g at 10,000Hz.

Due to the critical nature of these tests and the value of the equipment, all loadcells had to be traceable to a component level, which our versatile self-governed quality system could manage with ease. 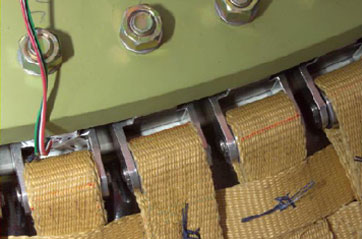 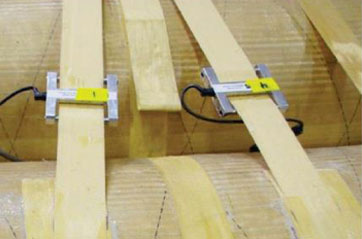 The shearpin loadcells were relatively simple in construction but for the flight tests needed to be capable of withstanding all of the conditions set out above. Every part of the gauging and wiring for each loadcell was done by hand and inspected thoroughly by one of the line managers. A log of all of the constituent components was kept for each loadcell and all of the technicians involved in the wiring and assembly needed to detail their involvement in each process. Dimensional data was provided at all important stages including machining, heat treatment, finishing and after proof loading to ensure that the tight tolerances were maintained. A traceability certificate for each loadcell was created from the accumulated data and supplied to NASA along with calibration certificates and declaration of conformity.

The in-line strap tension loadcells were based on existing F305 seat belt tension designs used for automotive safety testing and were integrated at 21 strap locations around the perimeter of the HIAD. These were optimised to be be as lightweight as possible and sit flat against any surface to avoid damaging the HIAD during deployment. The loadcells were calibrated using a sample length of the strap from NASA to ensure the validity of all calibrations done at our facility.

Both the shearpin and belt tension loadcells supplied by Novatech performed extremely well and allowed NASA to complete all of their test objectives during the first HIAD ground test campaign. Analysis of the detailed data has helped reveal trends that have been used to refine the computational model. This lead to a number of redesigns for the next series of ground tests, which have since been successfully completed. Low Earth orbit flight testing using the latest delivery of loadcells is currently scheduled for 2022.

Comprehensive traceability certificates supplied for each individual sensor gave NASA the confidence that all of the loadcells have been manufactured to an exacting standard. Every component part, including the adhesives and solvents, can be traced back to the specific batch number from the original supplier.

Novatech are particularly proud of our involvement in this project as additional equipment supplied by Novatech has also been involved in testing multiple other methods in parallel. Data obtained from the use of our loadcells has directly contributed to the reinstatement of this intriguing project, which once faced the threat of cancellation.

The HIAD has proven to display capabilities outside the performance envelope for normal parachute technology and a new project is already under way that includes ground testing of a new 6 metre diameter HIAD assembly.

In a technical paper written by Greg Swanson, from the AMES Research Center, for the 2013 American Institute of Aeronautics and Astronautics (AIAA) Aerodynamic Decelerator Systems (ADS) Technology Conference, Greg gives a very positive assessment of the force measurement system supplied by Novatech.

“The success of the strap load measurement systems has prompted the desire for more strap tension loadcells and load pins for the next series of testing. For the second round of ground testing, the HIAD project will have approximately twice the amount of loadcells. This will enable greater strap load measurement coverage across the 6m article”. “Beyond test article characterisation during structural load tests, the measurement systems will also be employed in future construction processes. In an effort to reduce some of the HIAD imperfections due to fabrication variability, strap tension loadcells will be integrated into the fabrication process to achieve more consistent strap pre-loads during the inflatable article construction. Overall, these strap load measurement systems provided significant benefits to understanding inflatable structure behaviour and performance. They will be implemented to a great extent for future ground tests providing valuable data for analytical model development and HIAD design optimisation”. 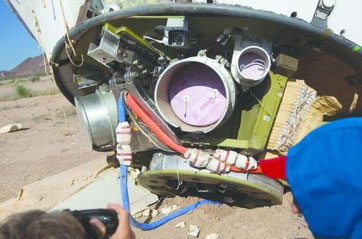 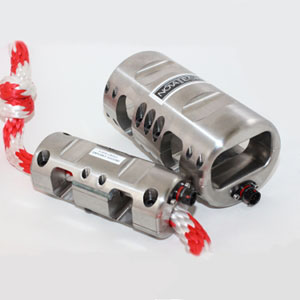 While ground testing of the HIAD continued, a separate team from NASA were tasked with the assessment of other leading fabric technologies. As the design of parachute systems did not require much development of new deployment systems, tests were able to progress to full flight tests much more quickly than with the HIAD project. In 2015 the team from the Lyndon B. Johnson Space Center used bespoke cord tension loadcells from Novatech in order to measure the tensile loads in the main parachute riser during capsule parachute assembly system (CPAS) drop tests. In these tests an entry vehicle was ejected from the back of a large military transport plane, at high altitude, so that the effectiveness of the parachute assembly could be recorded. The tests provided useful data, successfully measuring the riser tension throughout the entire parachute sequence, enduring dynamic loads during deployment, descent and landing with no visible damage to the risers.

For further testing carried out in 2016 and 2017, Novatech developed advanced versions of the sensors using bespoke programming techniques. This ensured that complicated machined parts could be made without leaving any sharp edges, which would otherwise require manual deburring and laborious inspection. It was a critical requirement that there be zero chance of damage to the risers, as any cut or abrasion to the riser could result in the loss of a parachute and an extremely expensive entry vehicle crashing to the ground at high speed. This required 4-axis milling in continuous fluid motions without lifting the tool off the work piece more than was strictly necessary.

The loadcells (pictured above) can be seen in position on the coloured risers, wrapped in white protective padding. They performed well in all CPAS tests and successfully characterised the performance of the parachute system. Further information relating to these bespoke cord tension loadcells can be found at the following link: