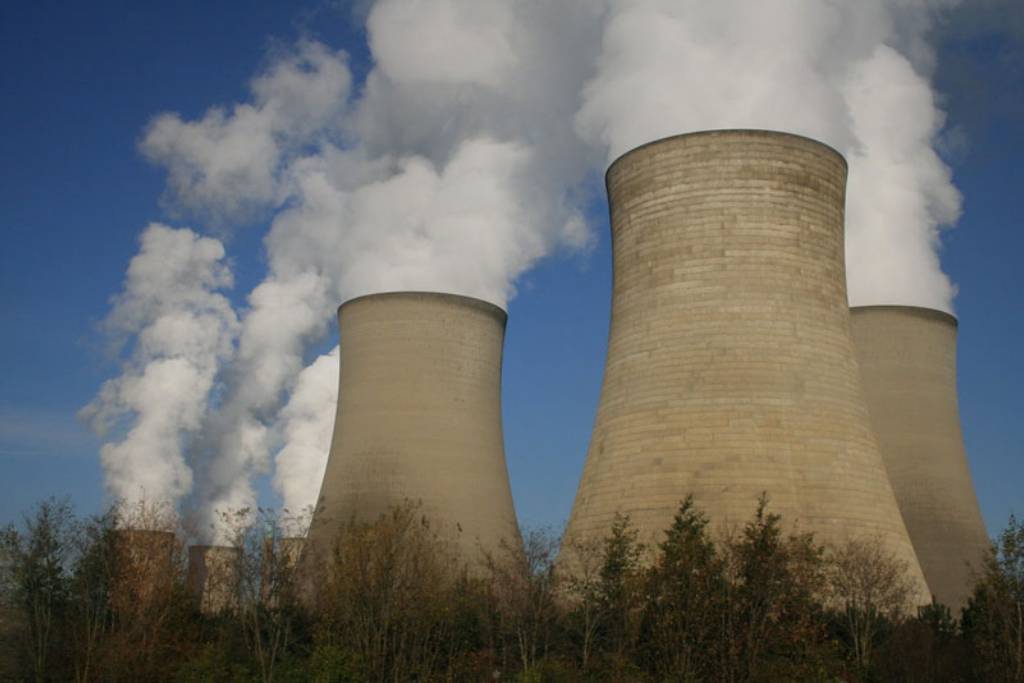 Safety Testing for the Nuclear Sector

The transportation and disposal of the waste material generated by nuclear power stations is often seen as a controversial subject. However, this is mainly an issue with public perception rather than any technical shortcomings. In reality the volume of waste produced is insignificant compared to the volume of other hazardous materials transported and stored on a regular basis and in some cases less than 1% of the nuclear waste from a power station is classed as dangerous ‘high level waste’. Public opinion is often skewed by high profile disasters such as Chernobyl but these are typically issues relating to outdated or poor design, coupled with operator error. Modern power stations are designed with safety as a prime concern and have numerous safeguards against any foreseeable event.

Natural disasters are one of the more critical safety threats as they can be unpredictable and powerful. For this reason it is extremely important to perform thorough testing for all possible eventualities. Novatech were contacted in early 2018 by research associates at Bristol university who were working on a project with EDF Energy. This project aimed to develop an intrinsically safe design for reactor cores that could withstand earthquakes.

Reactor cores are typically made up from a lattice of connected structures that house the nuclear material in the form of Plutonium fuel rods. The exact layout of these housings can vary depending on the size and design of the reactor. Bristol University had been tasked with simulating the effect of seismic activity on these housings as any cracks or defects that may develop can lead to significant safety issues. A number of different designs and variations were simulated using computer software before a real world model was fabricated for further testing in order to corroborate the results of the computer simulation. 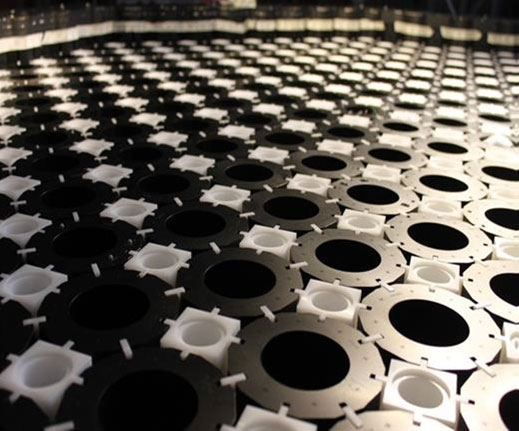 The research associates knew that a completely solid lattice would be more susceptible to the stresses of a seismic event, as the material would have no way to allow for the significant displacement that can occur during even the smallest category earthquakes. For this reason, they concentrated on a ‘floating’ system of loosely connected bricks that could be built up in layers to provide a suitable amount of play in all directions. The best performing structure from their computer simulations comprised of a series of octagonal blocks keyed together with loose fitting inserts as shown.

The physical model was made using hundreds of precisely machined plastic blocks and key plates. Around the perimeter of the model a series of half blocks were used that were hard fixed in position, with the rest able to float by less than a millimetre relative to their neighbour. However, over the entire array, the cumulative movement meant that some of the cores towards the centre of the model could move significantly in all directions relative to their original starting position without ever being completely unrestrained. The theory was that by allowing each block to move slightly they would soak up and distribute the forces created by the seismic event so that no individual block would see enough force to cause any damage. In order to test the theory, the researchers at Bristol University needed a way to measure the forces at various locations and in two perpendicular horizontal axes. Ideally the loadcells would sit within the central bores designed to house the fuel rods and be semicircular in plan-form so that they could also be used to test boundary conditions in the half blocks. If this could be achieved, the next step was to explore whether some of the blocks could be cut in half and fitted with a loadcell in such a way that it could be remotely separated to represent a critical failure during testing. Various tests would be performed using a shaker rig with the loadcells in different positions to get an overview of the forces at different locations and how individual blocks interact with each other. 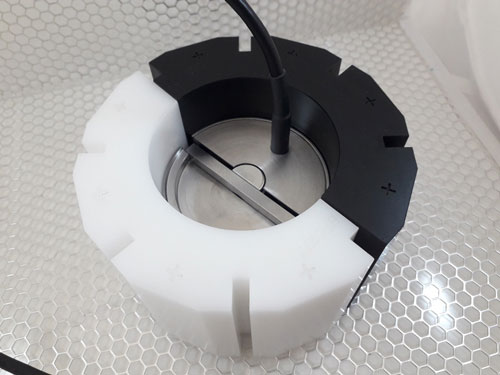 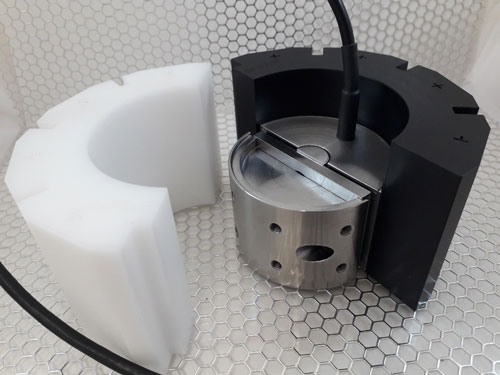 Novatech developed a two axis semicircular loadcell that could be bolted to a magnetic plate. The mating section would then house a switch-able electromagnet that would hold the block together all the time the electromagnet was powered up. As soon as the electromagnet was deactivated the two halves would be free to separate as if the block had been cracked through as a result of seismic activity. For boundary locations the active half of the loadcell could be bolted directly to the wall of the model by removing the magnetic plate and using the exposed fixings. Each loadcell also provided radial fixings for the attachment of the octagonal blocks in a way that would allow direct transfer of forces from all directions without restricting the movement allowed by the special keyway design.

The unique loadcell design allowed the customer to set-up for different measurements with ease. A new test condition could be prepared by simply lifting the relevant assemblies and repositioning them elsewhere in the grid, saving a lot of down time between the tests. The ability to split a number of the blocks without needing to remove hard fixings made it even easier as the loadcells could be used in any position without modification. The interaction between individual blocks could be measured before, during and after single or multiple component failure, giving researchers a broad overview of the mechanics of the design.

Accurate physical measurement provided data that could be used to validate computer analysis and give the customer confidence to continue with their design and simulation at pace. The free movement of the blocks proved to be key to the success of the design and the mechanism for splitting the blocks using the electromagnet was useful in proving that isolated component failures did not greatly reduce the design's overall effectiveness.